Kenya vs Nepal 3rd ODI
Skip to content
Home Nepal Another horror show with bat, another loss against Namibia 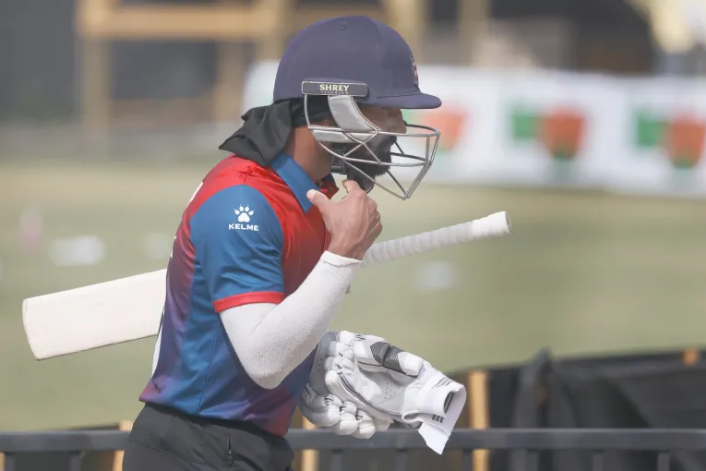 Nepal have lost their second match in the ongoing CWC league-2 tri-series in Scotland. Courtesy of the 63-run loss, they have now slipped to 6th in the points table. Nepal were looking for another decent start from openers after two promising partnerships (31 and 46 runs partnerships in the previous two matches). However, they lost their first wicket in the form of Kushal Bhurtel when he flicked leg stump half volley straight to a short fine leg fielder.

The second wicket was rather a controversial one. Another leg stump half volley from Frylinck and another flick shot, that was initially given six (probably based on crowd reaction), only to reverse the decision to OUT. It clearly wasn’t conclusive to be given out. The umpires generally give the benefit of the doubt to the batter but not in that case.

Amidst all chaos, Asif Sheikh was batting at his fluent best even when Rohit Paudel struggled to put the bat on the ball. However, he was deprived of a strike, and a combination of lapse of concentration and a half-hearted shot cost his wicket on 34. Aasif hit 6 fours during his short stay. Nepal were 46-3 after his departure. Dipendra Singh Airee, searching for runs, joined struggling Rohit. They put 23 runs before Rohit was given out caught behind what looked like another poor decision from Umpire.

Nepal kept on losing wickets. Aarif Sheikh fell to Frylinck on 4 as Nepal lost their 5th wicket at 82. Another promising partnership (36-run) took Nepal 118-6 before Aadil Alam (20) was holed out at long on trying to go for a six. Alam hit one four and one six during his knock. Nepal’s hope massively relied on Dipendra Singh Airee to take home. It ended after Airee ran out on 38 which was his highest score in the ongoing CWC League-2. Nepal’s talisman fell a few inches short of the crease during his quick second run despite full-length dive. Airee hit 3 fours during his stay.

The visitors lost the last three wickets rather quickly to hand Namibia 63 runs Victory, the second loss against the same opposition in this tri-series. They now have won both ODIs against Nepal after getting beaten in all four List-A matches previously. Left-arm spinner Bernard Scholtz took his maiden fifer, whereas another left-arm (seamer) bowler, Jan Frylinck scalped 3/26 including two early Wickets in the innings. Skipper Gerhard Erasmus had one wicket to his name.

Earlier Namibia chose to bat first once again after winning the toss. However, they did not have a good start as they would have wanted. Sompal Kami bowled a peach of the delivery to get rid of Lo–handre Louwrens (2) on his first delivery. 5 overs later, Skipper Lamichhane brought himself to remove Craig Williams on 5. Namibia lost their third wicket adding 8 more runs to find themselves 36/3 inside 1st 10 overs.

Jan Nicol Loftie-Eaton, who joined Captain Erasmus, scored 35-ball 19 during a 69-run partnership for the fourth wicket.  Gerhard Erasmus’ near flawless innings came to end on 53 when he was stumped by Aasif Sheikh. Namibian Skipper struck 4 fours and 1 six during his 70-ball knock. Three quick wickets meant Namibia slipped to 112-6 from 105-3.

Handy contributions from lower middle order batters helped Namibia to get 199 in the end. David Wiese contributed 34, whereas Johannes Smit scored 27. The seven and eight-wicket partnership added valuable 39 and 43 runs. Sandeep Lamichhane led the bowling chart with his yet another 4-wicket haul against Namibia; his two back-to-back in this ongoing tour. Both Sompal and Dipendra chipped in two wickets each. Spinner Basir added one wicket to his name.

Namibia have once again moved ahead of Nepal to climb 5th position with 19 points. They ended their tri-series with two wins (both over Nepal) & two losses ( both against Scotland). Nepal play their final match of the ongoing tri-series today against the hosts, Scotland.