Skip to content
Home Nepal The first One Day between Nepal and Canada today, here is the head-to-head result 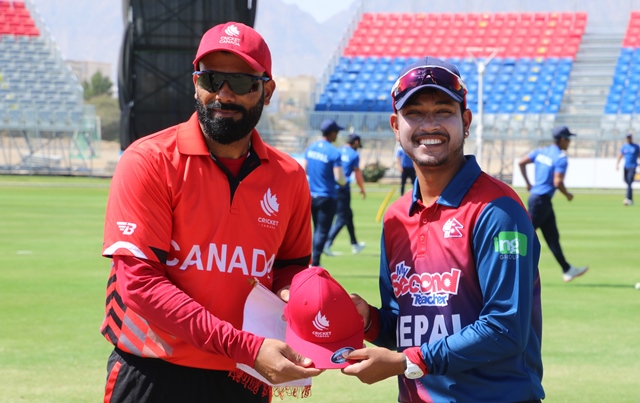 The Nepali national cricket team, which is on a tour of Canada, is facing the home team today. In the first ODI, Nepal is going to face Canada today.

Nepal, who arrived in Canada for the two-match ODI series, is planning to make a good start to the series by winning the first match. The game will start at 8:45 pm Nepali time at King City Ground.

The last time Nepal and Canada met in an ODI format was in the T20 World Cup global qualifiers held in the UAE in February this year. Nepal won the match by 8 wickets and met the target of 81 runs set by Canada in 14.1 overs. Sandeep Lamichhane took three wickets while Kamal Singh Airy and Avinash Bohara took two wickets each. Kushal Bhurtel and Dipendra Airy scored 34 and 27 runs respectively.

In the ODIs, Nepal and Canada have competed three times so far in which Nepal has won two games and Canada has won one game.

The last meeting between the two countries in ODIs was held 4 years ago in 2018. In the same match, Karan KC and Sandeep Lamichhane shared 51 runs for the tenth wicket. Batting after losing the toss, Canada scored 194 runs with the help of Srimantha Vijaratne’s century (103). In Nepal’s bowling, Basnet Regmi took 3 wickets and Sandeep Lamichhane took 2 wickets. After losing 9 wickets for 144 runs while chasing the target, Karan KC scored an unbeaten 42 runs to give Nepal victory in the last ball. Dilip Nath scored 41, Rohit Poudel 27 and Arif Sheikh 26 runs.

Before that, Nepal had defeated Canada by 7 wickets in Division II in 2015, during which Nepal easily followed the target of 115 runs given by Canada. Karan KC took 5 wickets and Paras Khadka contributed 77 runs.

Canada had defeated Nepal by 12 runs in the 2014 ODI World Cup qualifiers. Following the 256-run target set by Canada, Nepal managed to score only 243 runs despite Gyanendra Malla’s 86 runs.