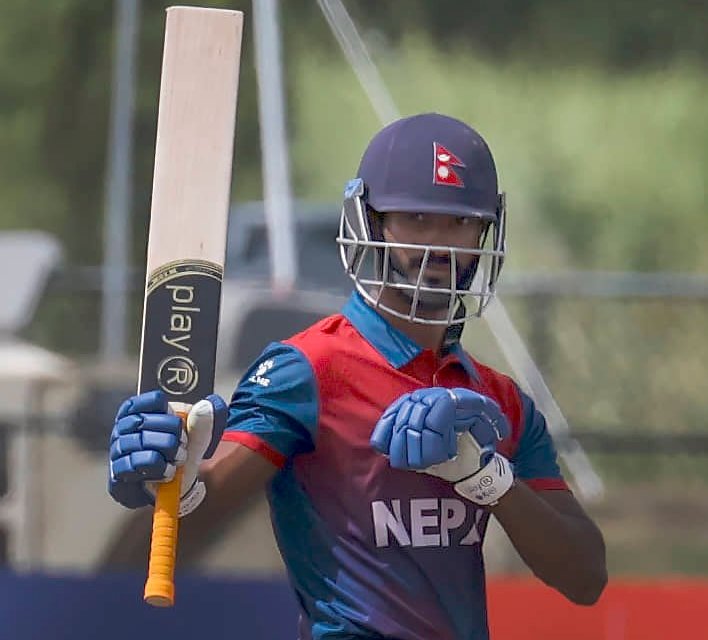 Nepal are currently second from the bottom in the ongoing CWC League-2. They have won only 8 out of 20 matches and grabbed 17 points. The top three teams will directly qualify for next year’s ICC CWC qualifier. Everyone is aware of the fact that batting has been Nepal’s weakest link and it has already cost them a few points. Here are the top 5 highest run-scorer for Nepal so far in the competition.

Younger of the Sheikh brothers, Asif is Nepal’s highest run-getter in the tournament so far. Asif, who made his One day International debut last year against Oman, has been prolific in the last two series. Three out of his four fifty-plus scores came in that period. In the USA he hit two fifties (61 vs USA and 62 vs Oman). With 481 runs in 14 games, he leads the batting chart. His best knock (90) came against Oman in a losing cause.
Even in the Scotland tour where most Nepali batters struggle, he was the one who scored some runs and showed his talent. Asif hit 71 against Namibia in Nepal’s only win in the tour. However, he waste two good starts (34 and 40) against Namibia and Scotland.

The vice-captain of Nepal’s cricket team has been a mainstay of the batting in recent times. However, he couldn’t score much in the previous tri-series when a lot was expected from him. Paudel failed to make any substantial contribution (0, 34*, 17 and 10). Yet, he is second in the list of highest run-getter for Nepal in CWC League-2 thus far with 434 runs from 17 innings including three half-centuries. If Nepal are to win most of the remaining matches, Rohit will have to contribute the majority portion.

With 351 runs from 14 innings and 4 half-centuries, the senior of the Sheikh brothers is third on the list. Batting mostly at the lower middle order, Arif has managed to notch four fifties with wickets Falling from another end. Only unbeaten 59 against PNG came at number 3. His highest score is 66 against Oman during the USA tri-series.

While Asif Sheikh is finding his golden touch since his return, his flashy opening partner is having a tough period in One-dayers. He started CWC League-2 well with his swashbuckling 84 against the USA in a 231 run-chase. Since then he has been short of runs. The next 14 innings produced only 2 fifties: against PNG and Oman. In the last tri-series in Scotland, his willow yielded only 57 runs from 4 innings.

The former Skipper hit 286 runs from 11 innings before he was kept out of playing XI in the UAE tour and later dropped for the next two series (in USA and Scotland). Malla has hit three fifties so far. Two against Oman and one against UAE. Best of 76-ball 56 came against touring Oman side at T.U ground in the eight-wicket thrashing loss.