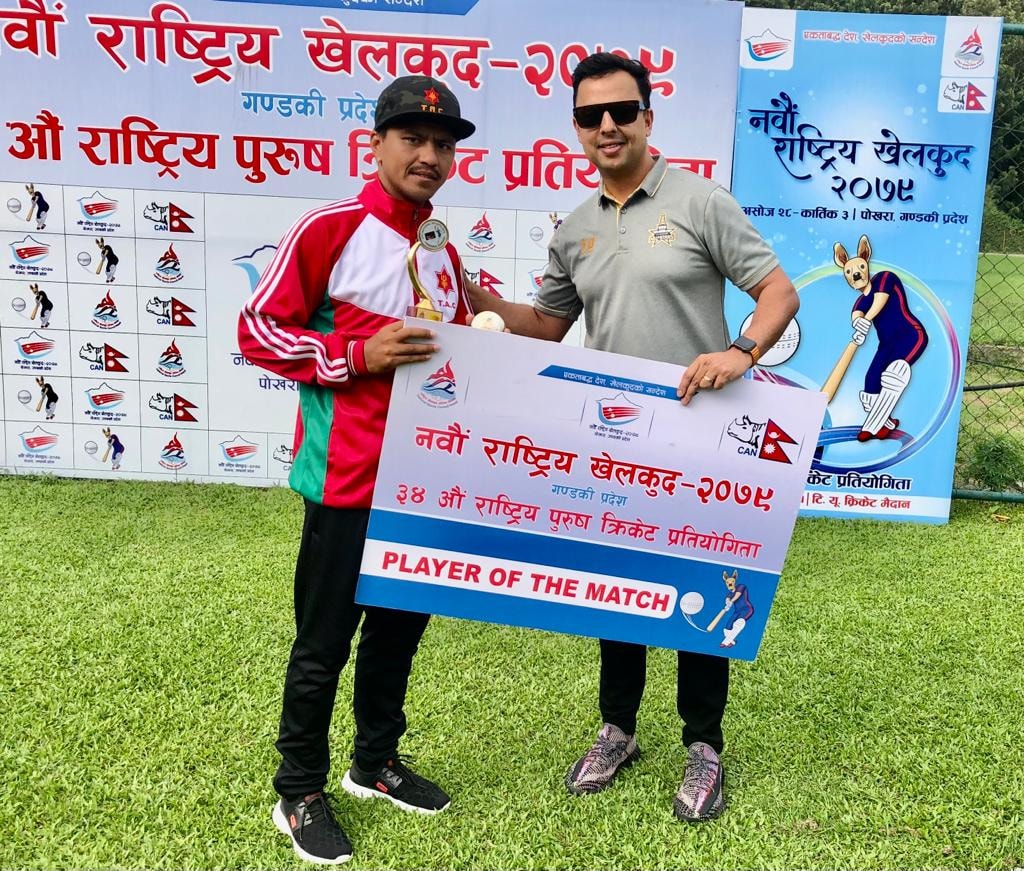 Karnali Province won their first game of the tournament as they overcame a three-run win over Madhesh Province. In another match, Tribhuwan Army Club secured a convincing 9-wicket win against helpless Lumbini Province.

In the thrilling first match at T.U ground, Karnali Province kept their semi-final hopes alive with a thrilling 3-run win. Following Aadil Alam’s five-wicket haul, Karnali Province were restricted to 114. Opening batter and keeper batter Bipin Rawal was the top-scorer for Karnali with 24 off 25 balls whereas Prakash Jaisi (19), Dinesh Adhikari (15), and Skipper Rabindra Shahi (10) all chipped with some contributions.

Despite Rakesh Kamat’s (19 off 8) two sixes in the final two deliveries, Madesh Province fell 3-run short. The opener Harishankar Shah scored a gritty 42-ball 48 with the help of three fours and 1 sixes. Similarly, Rohan Bk hit 10 runs. No other managed to hit the double-digit mark.

Dinesh Adhikari (also won player of the match award) was pick of the bowler for Karnali as he scalped 3/16. Diwan Pun and Rabindra Shahi also made an impact with their two wickets each.

Tribhuwan Army have almost confirmed their spot for the semi-finals as long as they avoid an outrageous loss against Nepal Police Club Tomorrow. Sushan Bhari once again was the pick of the bowler. His five-wicket haul, including a hat-trick limited Lumbini to just 85/9. Hari Chauhan also added two wickets to his tally.

The army did not break a sweat as they knocked off the target in 10.3 overs to register a 9-wicket win. Hari Chauhan, who missed out yesterday, made a handy 20-ball 35 (4 fours and 2 sixes). Arjun Saud remained unbeaten on 28 whereas Bhim Sharki contributed an unbeaten 18.

Sushan Bhari was awarded player of the match for the second time in a row. Full Scorecard

Both the matches at Mulpani were once again washed out for the sixth day in a row. With that result, Sudur Paschim Province advanced from Group B along with NRNA. The second match between NPC and Gandaki Province also ended in a “No result”.