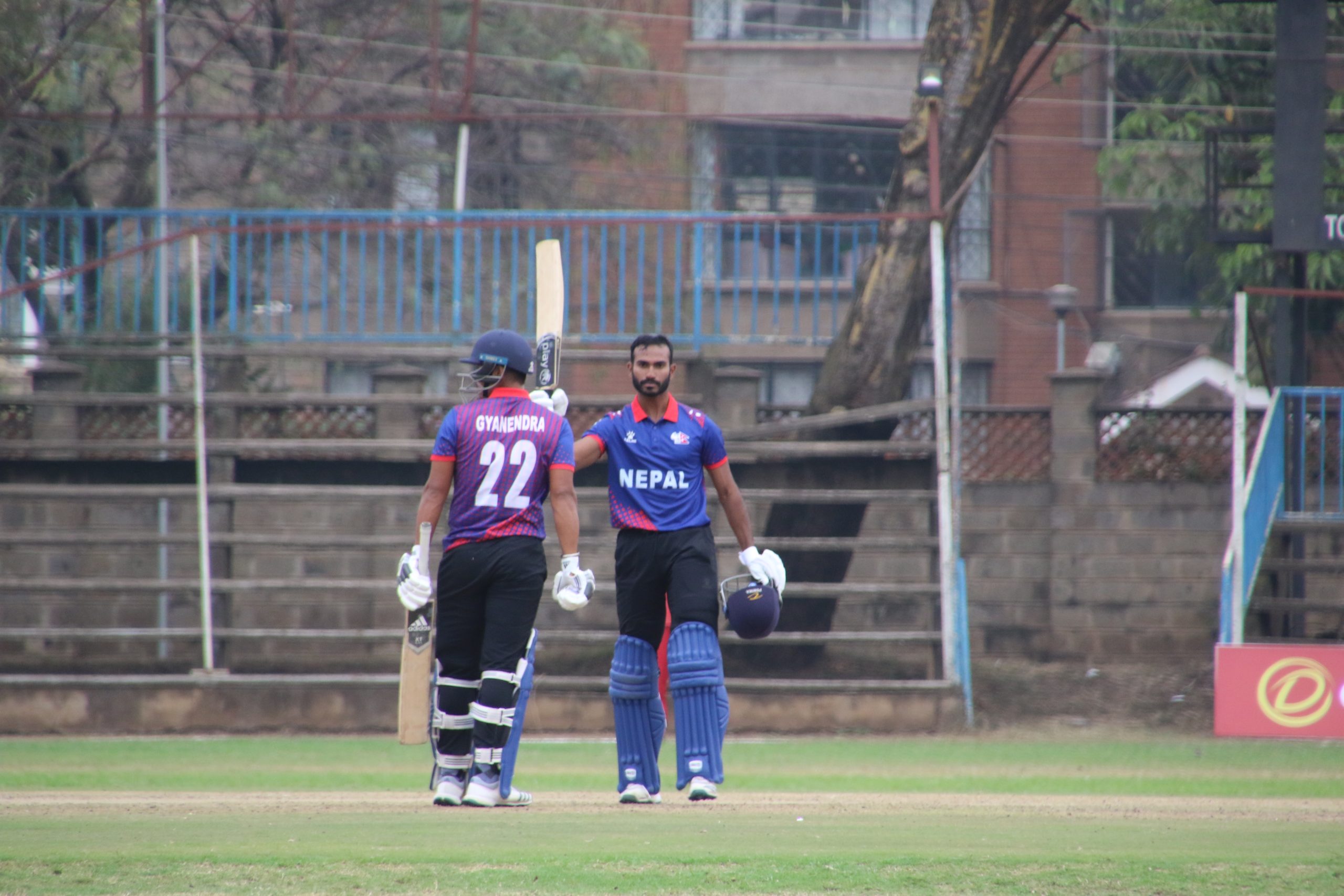 Nepal beat Kenya by 7 wickets in the first of three one-dayers to take a 1-0 lead. Chasing 219, Nepal hunted down the total in 47.2 overs on the back of brilliant performances from the opening pair.

The pair – Arjun Saud (List-A debut) and Aasif Sheikh – put on a record 141 runs partnership for the opening wicket. It was the highest-opening partnership for Nepal in the List-A matches; and the second highest for any pair. Debutant Saud made an impressive 61 off 97 balls with the help of 5 fours and 1 six.

He became the third batter to notch fifty on his List-A debut for Nepal. Sharad Vesawkar and Kushal Malla were the other two batters to achieve the feat. Aasif Sheikh went on to make his maiden List-A century.

The Opener batter became the fifth batter after Anil Mandal, Paras Khadka, Rohit Paudel and Dipendra Singh Airee to register List-A ton for the country. Asif hit 12 fours and 2 sixes during his ton.

Gyanendra Malla, on his return to the one-day side, scored 24 off 50 balls at number 3. Similarly, Skipper Dipendra Singh Airee contributed an unbeaten 15, and Skipper Rohit Paudel made 3.

Collins Obuya, Vishil Patel and Rakel Patel all grabbed a wicket each for the hosts.

Earlier Kenyan Skipper Shem Ngoche did not hesitate to bat first on the surface which the batters have enjoyed in the T20I series. On the very same pitch, Nepal chased down 157 and also made 175 in the series decider.

Nepali opening bowlers provided a brilliant start as Kenya were reduced to 33/3 in the 9th over of the match. While Sompal Kami removed the opener Sukdeep Singh (6) and Nelson Odhiambo (2), Karan KC sent back Alex Obanda for a duck.

Pawan Sarraf complimented the pacers, picking the big scalp of dangerman Irfan Karim on 30. Kenya were in all sort of trouble at 49/4 at that point. However, the duo of Rakep Patel (67) and Collins Obuya (62) weathered the storm with a solid 130-run partnership wicket for the fifth wicket. The pair frustrated Nepali bowlers for almost 29 overs.

Just when the partnership looked all set to punish Nepal at the death over, Aadil Alam dismissed Patel. Three overs later, Rohit ran out Obuya to give Nepali fielders some shy of relief. It then went downhill from there on as Kenya lost the remaining 4 wickets for just 21 runs.

Both Opening bowlers (Karan and Sompal) scalped three wickets, whereas Aadil and Pawan added one wicket to their name.

Asif Sheikh was awarded player of the match for maiden Ton. Nepal play Kenya in the second One-day match at the same venue.