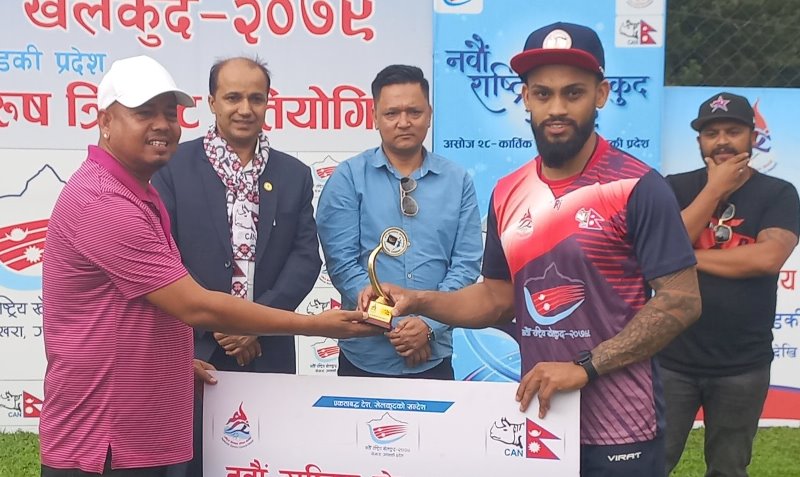 Nepal Police have won the gold medal in Men’s T20 national games. They beat Tribhuwan Army by 8 wickets and took revenge of the loss from two days ago when the side met in the final group stage match.

Chasing the target of 104 set up by the Tribhuwan Army, Nepal Police chased 105 in just 6.5 overs. Thanks to a blistering opening partnership between Kushal Bhurtel (51) and Sunil Dhamala (42)*. The pair shared a 92-run stand in just 33 balls. Kushal Bhurtel smashed the fastest fifty in the tournament in just 17 balls. He blasted 3 fours and 6 sixes.

His partner Sunil Dhamala wasn’t far behind either. Dhamala, who had a brilliant tournament, made an unbeaten 17-ball 42. Aarif Sheikh, who has had a good tournament, finished the chase with six off the first ball.

Jitendra Mukhiya and Sushan Bhari picked one wicket each.

On the back of handy knocks from Skipper Binod Bhandari (40 off 14) and Rohit Paudel (28 off 10), Tribhuwan Army posted 103/7. While Bhandari hit 3 fours and 4 sixes during his knock, Rohit Paudel amassed four sixes.

Lalit Rajbanshi, who bowled only one over, conceded only four runs and picked two wickets. Gulshan Jha also scalped 2-for whereas Rashid Khan and Dipendra Singh Airee both took one wicket each.

Kushal Bhurtel, who hit his second fifty in the tournament, bagged the player of the match award for his match-winning knock.

In the Bronze medal match, Sudur Paschim Province won the Bronze Medal – in a bizarre fashion – after winning the “coin toss” against NRNA. The play wasn’t possible due to a wet outfield. This is among the rarest incidents in Nepali domestic cricket tournaments.