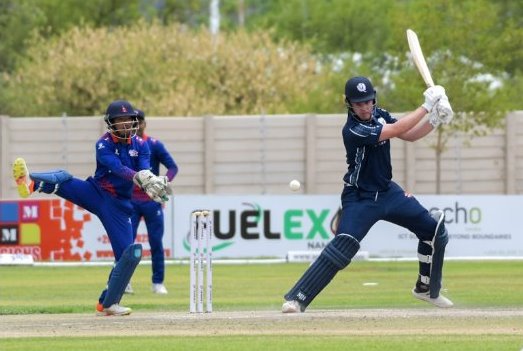 Nepal lost to Scotland by 3 wickets in the second match of the ongoing triangular one-day international series in Namibia under the ICC World Cup League-2. Nepal was defeated for the second time while playing the third match against Scotland under League-2.

Scotland met the target of 138 runs given by Nepal at the United Cricket Club ground in Windoek by losing 7 wickets in 32.1 overs.

The total of 137 runs is Nepal’s seventh-lowest total in ODIs. In July this year, Scotland contained Nepal by 128 runs.

After losing 2 wickets for 44 runs when Arjun Saud was run out in the fifteenth over, Nepal’s wickets did not stop. Arjun and Gyanendra shared 37 runs for the second wicket, which was the highest partnership of the innings. Aarif and Rohit added 23 runs for the fourth wicket.

The first match of the series between Nepal and Namibia was scoreless due to rain.

Nepal is scheduled to play the third game of the series against Namibia on Wednesday, December 7 and the fourth game against Scotland on Thursday, December 8.

After defeating Nepal, Scotland has reached the top of the league-2 points table. Despite having the same 44 points, Scotland lead in net run rate. In 30 matches he has 21 wins and 7 losses and 2 matches are without results. After the defeat, Nepal remains in sixth place. Nepal has managed to register 12 losses and 8 wins while playing 22 matches, while 1 match has ended without result and 1 match has ended in a draw.