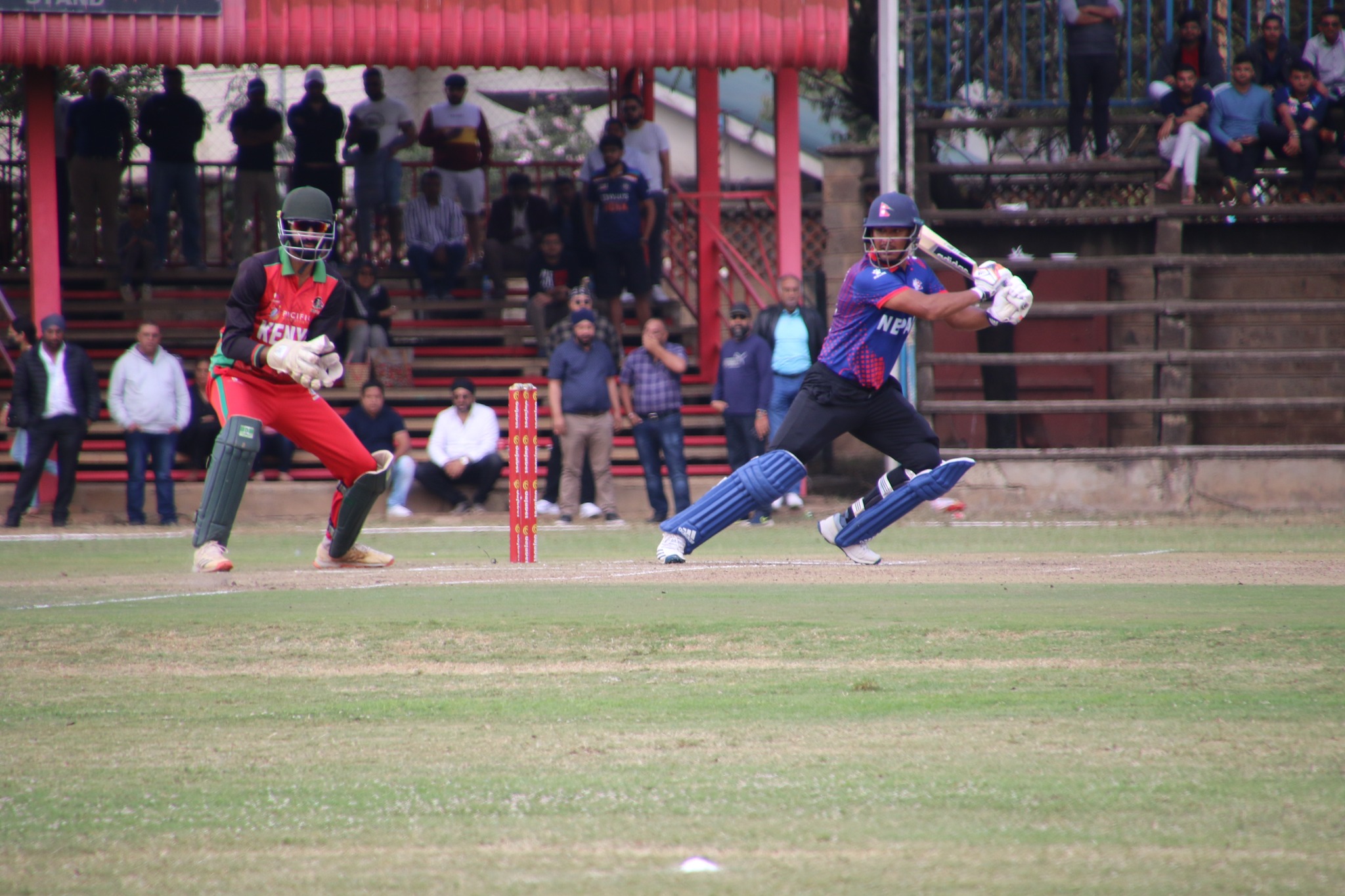 ﻿Nepal defeated Kenya in the fifth and final encounter to clinch the T20I series 3-2. Courtesy of brilliant batting and solid all-round performances from bowlers, Nepal registered 31 runs victory over Kenya in the decider.

Chasing a challenging 176, Kenya lost one of their openers in the second over of the innings as Karan KC sent Sukhdeep Singh’s stumps flying.

The hosts then had a steady partnership between Collins Obuya (23) and Irfan Karim (28). The pair put in 45 runs partnership. Kenya then lost three wickets in quick succession to find themselves 55/4. Sandeep sent back dangerous Rakep Patel for 1 and also had Sachin Bhudia (0) three balls later in the same over.

Throughout the innings, Nepal kept picking wickets at regular intervals to keep the hosts under pressure. Nehemiah Odhiambo top-scored Kenya innings with a rapid 37 off 22 balls before handing an easy catch to Basir Ahamad. The hard-hitting all-rounder smashed 4 fours and 1 six during his resistance.

Skipper Shem Ngoche also provided some entertaining cameo during his unbeaten 18-ball 33 but Kenya never looked a threat to Nepal during the chase. Nelson Odhiambo was unbeaten on 13.

Captain Sandeep Lamichhane added two more wickets to his name and finished with 12 wickets in the series. Basir Ahamad also scalped 2 wickets on his return whereas Aadil, Karan and Karan took one wicket apiece.

Nepal batted first after winning the toss in a series-deciding match. The same pitch, where the visitors chased down 157 two days earlier, was used today and Nepali batters once again enjoyed the surface again.

Following Pawan Sarraf’s poor form, Gyanendra Malla was promoted to opening. The pair of Malla and Saud put 65-run for the first wicket and laid the platform. Arjun Saud once again scored an impressive 21-ball 29 before Ngoche had him via stumping. The 19-year-old smashed 4 fours and 1 six.

Another handy 40-run stand came in the form of the Airee-Malla duo. The partnership was broken as Nepal went past the 100-run mark when Airee slapped widish delivery straight to the deep cover fielder on 22 (3 fours).

Malla, who struck solid 46 two days ago, notched his 3rd fifty-plus score in T20I, ending 998 days draught without T20i fifty. He perished on 59 off 44 balls to Vraj Patel. The former Captain slammed 5 fours and 2 sixes.

Rohit Paudel, continuing his good form, struck another 47 – twice in two days – to help Nepal reach 175/7. Paudel fell 3 shy of what would have been his 2nd T20i fifty when he tried to fetch a slower ball from Odhiambo.

While the Player of the match award was given to Gyanendra Malla for his half-century, Nepal’s skipper Sandeep Lamichhae grabbed the player of the series award. Lamichhane nabbed 12 wickets including the maiden T20I five-wicket haul in the 5-match series.

Nepal won the hard-fought T20I series but they have lost quite a few rating points after two losses in the series. The first of three One-dayers will take place two days later.