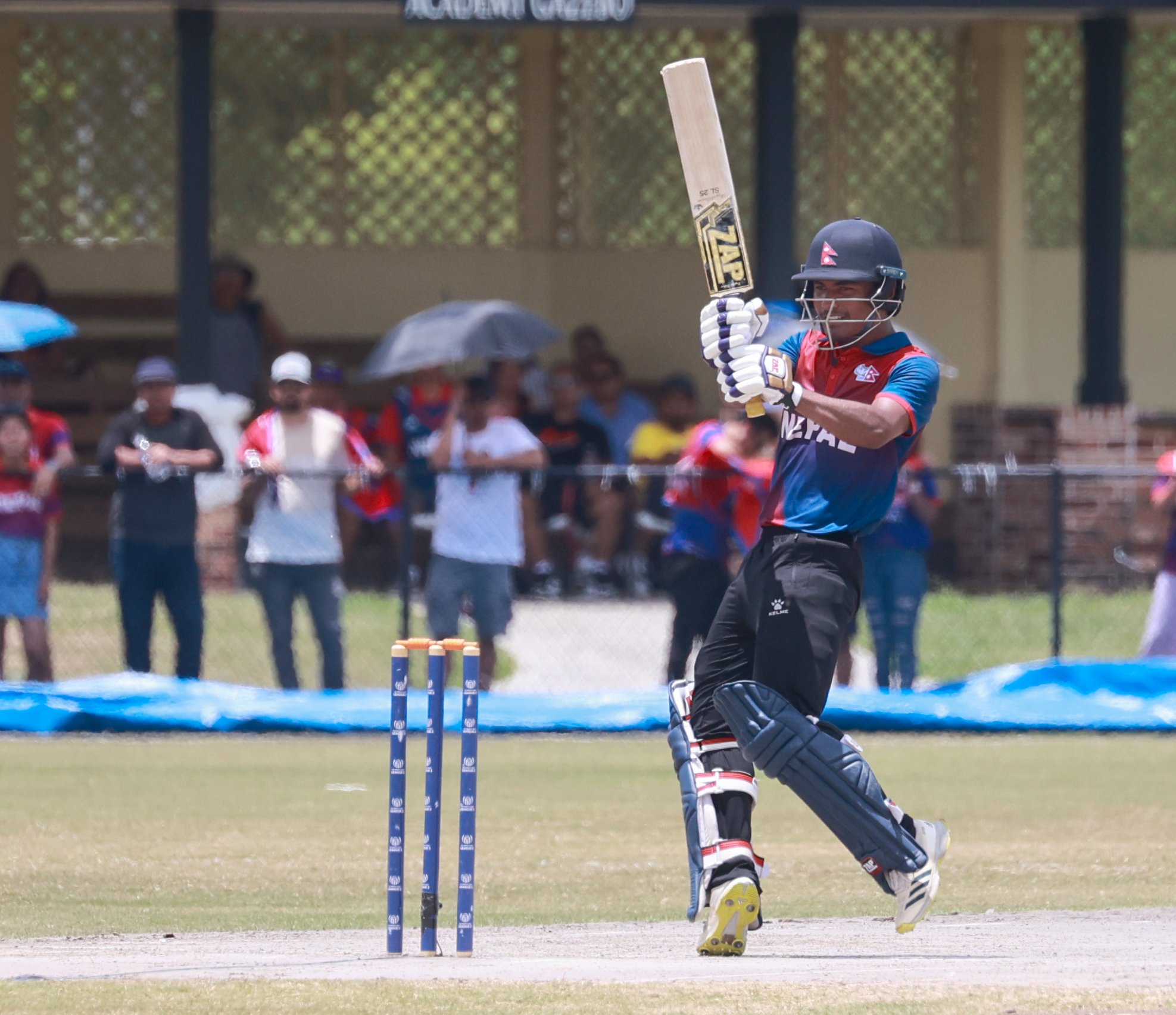 Nepal register two wins from two matches to clinch the one-day series with one match still to play. The visitors win by 17 runs in a tense thriller in the second match of the one-day leg.

Defending 231, Sompal Kami provided a cracking start for Nepal as he dismissed out-of-form Sukhdeep Singh for a golden duck. Nelson Odhiambo then counter-attacked with 27-ball 28 before Sompal trapped him in front of the wicket to leave Kenya 35-2. What followed was a disaster. Kenya lost another two wickets in the form of Irfan Karim (8) and Sachin Bhudia (0).

Kenyan (at 39/4) were quickly put off the track by Nepali pacers; Sompal in particular. Once again two senior campaigners Collins Obuya (36) and Rakep Patel (81) steadied Kenya’s ship much like they did in the previous encounter. The pair put an 81-run stand for the fifth wicket. The partnership was finally broken by Pawan Sarraf, who had Obuya caught behind by keeper Saud.

Rakep Patel, continuing his form, notched yet another half-century; second in the one-day series. He was joined by Nehemiah Odhiambo after the fall of Obuya’s wicket. Another handy 50-run partnership meant Kenya were threatening to chase down the total.

Aadil Alam provided a timely wicket as he rattled Odhiambo’s stumps. Soon after, dangerman Rakep Patel (84) too departed after he miscued a slog sweep of Airee. Basir Ahamad held on to an easy catch at short mid-wicket.

Patel faced 98 balls for his 81, the innings included 8 fours and 1 six. Kenya then slumped to 187/9. It looked all lost for the hosts but the last wicket partnership put Kenya brink of victory.

However, Dipendra Singh Aire cleaned up Gerald Mwendwa (20) with a yorker to end Kenya’s hope. The hosts were bundled out on 213. He finished with 4/12. Likewise, Sompal Kami grabbed three wickets. Three other bowlers – Karan, Aadil, and Pawan – all pocketed one wicket each.

Earlier Nepal won the toss and elected to bat first. Dev Khanal replaced centurion Asif Sheikh, who had a slight niggle. Nepal did not get the start they wanted as wicket-keeper batter Saud (5) perished early on the sixth over of the match.

Malla, who joined Khanal, scored 37-ball 25 before he was bowled out by Ngoche. The duo put a 56-run stand for the second wicket. Dev Khanal, too, soon followed Malla’s path as he was trapped in front of the wicket by Vraj Patel on 37.

Dipendra Airee (2) once again got out early as he chipped an uppish drive straight into Rakep Patel’s hand at the cover. Basir Ahamad, who was promoted ahead of Sarraf and Aadil, contributed 17 before he was involved in a mixed-up (and then slipped) with Skipper Rohit that resulted in a run-out.

Once again Rohit was firmly holding his end despite wickets were falling from another end. Nepal continued to lose wickets at regular intervals and eventually folded for 230 with four deliveries still remaining in the innings.

Rohit top-scored the batting chart with a solid 78 off 95 balls, whereas Sompal Kami made a handy 15-ball 26 to lift Nepal’s innings. Aadil Alam (14)  and Karan KC (11) also chipped with double-digit scores.

Skipper Rohit Kumar Paudel, who slammed 78, was named player of the match.

The third and final One-day match will be played a day after tomorrow to conclude the tour. Nepal won the hard-fought T20i series 3-2 against the hosts.