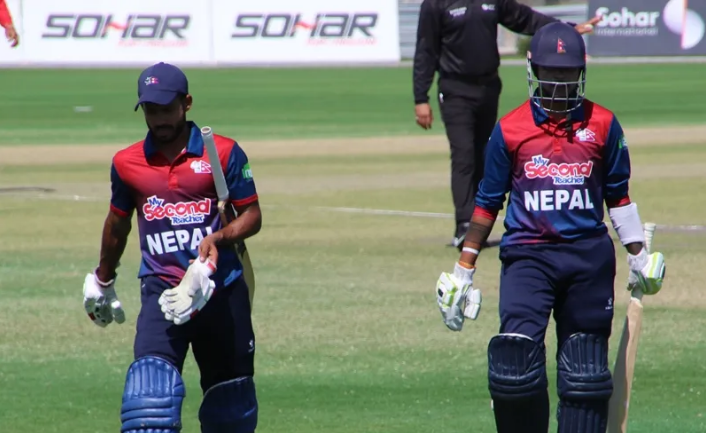 Namibia registered their first win over Nepal in List-A cricket (also in ODI) as they thumped Nepal by 40 runs in the second match of the ongoing CWC league-2 tri-series in Scotland. Previously, they had lost all four meetings against Nepal in List-A matches.

Chasing a modest 221, Nepal were bowled out for 180 runs. Aarif Sheikh, continuing his good form, scored an unbeaten half-century for Nepal. Dev Khanal (34) and Kushal Bhurtel (27) are the other two batters with 20-plus runs in the innings.

Aasif Sheikh (14) was the first batter to depart on the 8th over with a score of 30. 19-run stand between Kushal Bhurtel and Dev Khanal took Nepal one shy of 50. The partnership was broken after Bhurtel was given stumping by the square-leg umpire. 49-1 soon became 58-4 in the space of 5 overs. Vice-captain Rohit Paudel (0) was given run-out, whereas Dipendra Singh could only add four runs before he handed an easy catch to Erasmus on mid-on.

The highest partnership of innings came when Aarif Sheikh joined Dev Khanal. The pair put a 45-run stand for the fifth wicket before Khanal was trapped lbw by Frylinck. Aarif notched his 4th ODI half-century – all four in this CWC league-2 series – the most by a Nepali batter in the ongoing series. The Senior of the Sheikh brothers was stranded on 50 as Nepal kept losing wickets from another end. Aarif hit 2 fours during his knock. Karan KC (19), Alam (10), and Sompal (10) all chipped in with some contribution in a lower-middle order but it was not enough to prevent 40 runs loss.

Earlier Namibia decided to bat first after winning the toss. Nepal bowled well to restrict them to 220 in 47.3 overs. Jan Nicol Loftie-Eaton top-scored Namibia’s innings with 70-ball 60. Despite losing the first wicket on 31, Nepal raced to 63 quickly before Lamichhane put a break on Namibia’s run rate when he sent back dangerous-looking Divan la Cock, who scored 41 off just 31 balls with the help of seven fours.

Afterward, Nepal managed to keep Namibia under check until they had a handy 50-run stand for the 7th wicket in the form of Wiese (18) and Loftie-Eaton. The later one hit five fours and one six in his knock. Similarly, Skipper Gerhard Erasmus (22) and Craig Williams (21) are the other two batters with 20-plus scores.

Sandeep Lamichhane (10-0-54-4) was the pick of the bowler for Nepal, however, his 2nd spell (after injury) was slightly expensive (5-0-40-2). He has now back-to-back four-wicket hauls against Namibia. On contrary, Sompal’s excellent second spell (4-0-21-2) helped Nepal to bowl them out for 221. Karan KC, Basir Ahamad (on debut), and Dipendra Singh Airee all grabbed a wicket each.

Nepal fell one spot behind Namibia in the CWC league-2 points table after yesterday’s loss. Namibia moved to 5th with 16 points (from 16 matches). They now play the hosts, Scotland tomorrow at the same venue.