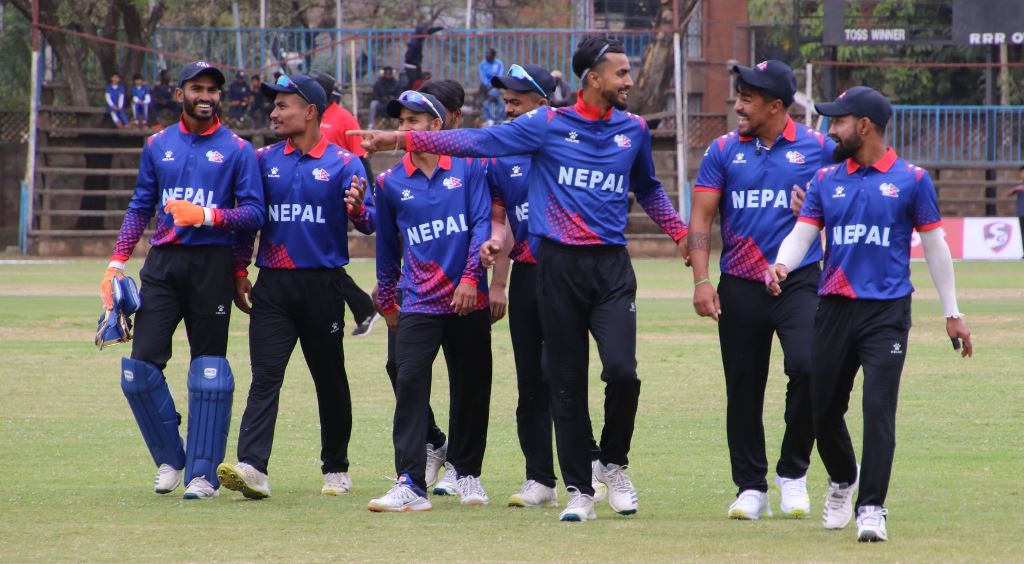 ﻿Nepal defeated the hosts, Kenya in the first of five-match T20I series to take 1-0 lead. The visitors won by 5 wickets chasing 131. Nepal vs Kenya Scorecard

Chasing a modest total of 131 runs, Nepal lost early wickets in the form of Pawan Sarraf, who was brought in the place of Kushal Bhurtel.He handed an easy catch to mid wicket fielder when he miscued pull shot from Lucas Oluoch.

Wayward bowling from Nepal saw 46/1 at the end of power play.

Coming back to the side after 6 months, the former captain Gyanendra Malla walked at 3 to join Asif Sheikh. Malla got his innings going with a confident lofted drive over mid off fielder.

Asif and Malla began to build partnership, just when they were looking good, against the run of play, Asif lost his wicket on 19 off 27 balls. The opener was bowled by Nehemiah Odhiambo when tried to glide through the third man region.

Malla too perished soon after on 23 off 27 balls while trying to take down long on fielder. It turned out to be a bit tense when Rohit Paudel (13) was castled by Vraj Patel while attempting a sweep shot.

Handy 34-run stand between Airee and Aarif for the fifth wicket partnership took Nepal close to victory. However, Nepal lost Airee (33 off 24 balls) in the penultimate over. The pair of Aarif (24 off 15 balls) and Aadil (2) ensured there would be no further loss of wicket.

Earlier Nepal won the toss and chose to bat first. The decision proved to be right straightaway as Sompal provided the first breakthrough for Nepal – dismissed Alex Obanda for 6. Nepal then took two more wickets to reduce the hosts 45/3 by 8th over.

Most of the batter Kenyan batters got starts but couldn’t get going. Wicket-keeper Irfan Karim, who scored 34 off 44 balls, was one of them. Nelson Odhiambo was dismissed by Airee on 19.

Sachin Bhudia, blasted two sixes of Lamichhane, before handing easy catch to Lamichhane himself in the very next over of Sompal, but not before hitting 17 off 15 balls

The innings was uplifted by rampage Lucas Oluoch, who slammed 13-ball 31 with the help of two fours and 1 six.

Sompal Kami, one of the late arrivers in Kenya, was pick of the bowlers. He took 3/22. Similarly, Sandeep (2/33) stretches his wicket taking streak to 25 consecutive matches now. All-rounders Dipendra Airee and Aadil Ansari grabbed one wicket each.

Sompal was named player of the match for his outstanding bowling spell (3/22) in the first innings. Nepal play 2nd T20I tomorrow in the same venue.