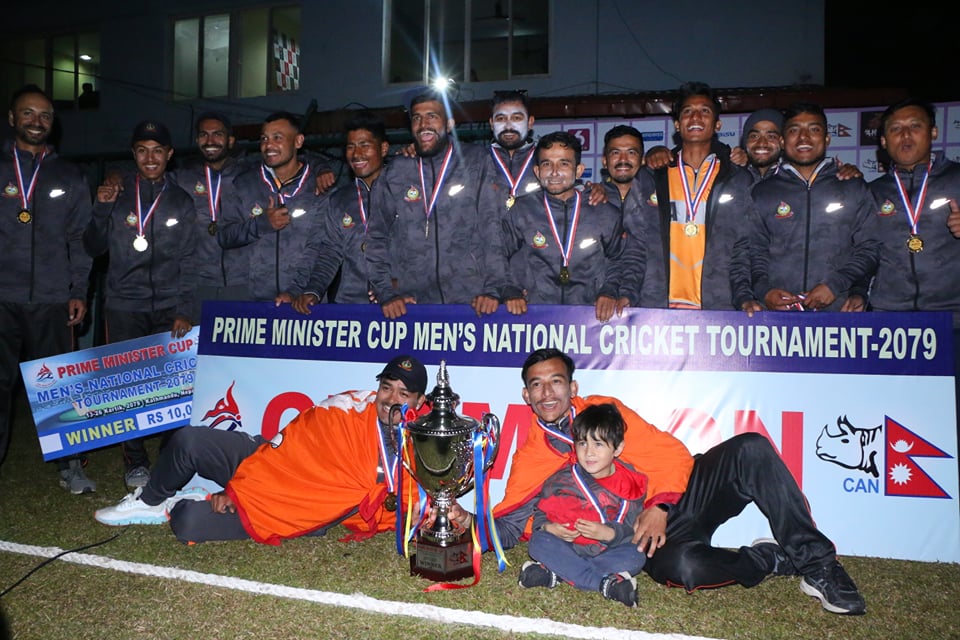 APF met the target of 180 runs given by Army in 38.3 overs at the TU Internaional cricket ground.

Chasing the target, APF scored 82 runs and lost 4 wickets. Bhuwan Karki, who batted at number four, shared a 75-run partnership with Sumit Maharjan. In the thirty-fourth over, Maharjan was bowled lbw by Sushan Bhari before he scored 34 runs. Bhuwan then shared a 22-run partnership with captain Sharad Vesawkar.

Bhuwan was run out with 1 run left to win. Before that he scored 55 runs off 82 balls with the help of 4 fours and 1 six. Sharad Vesawkar scored 16 runs unbeaten.

After losing the toss and being invited to bat, the army made a total of 179 runs after losing all the wickets in the 39 overs of the game, which was shortened to 40 overs.

National team captain Rohit Paudel, who faced 56 balls for Army, contributed 49 runs with three fours. Other batters did not perform well. However, Jitendra Mukhia and Sushash Bhari shared a 48-run partnership for the last wicket.

While Sushan got out with 19 runs off 25 balls, Jitendra remained unbeaten with 24 runs off the same 25 balls. Amar and Mausam, who bowled hard for APF, spent 40 and 32 runs respectively in eight overs of their quota to take three wickets. Similarly, Kishore Mahato, who spent 16 runs in five overs, took two wickets.

The match did not start on time and was delayed by almost two hours due to the controversy that arose after Army replaced Anil Mandal with Sompal Kami in the team.

Finally, the game started at 11 o’clock by including Sompal. Sompal, who came in as an opener for Army, was dismissed for zero after playing four balls.