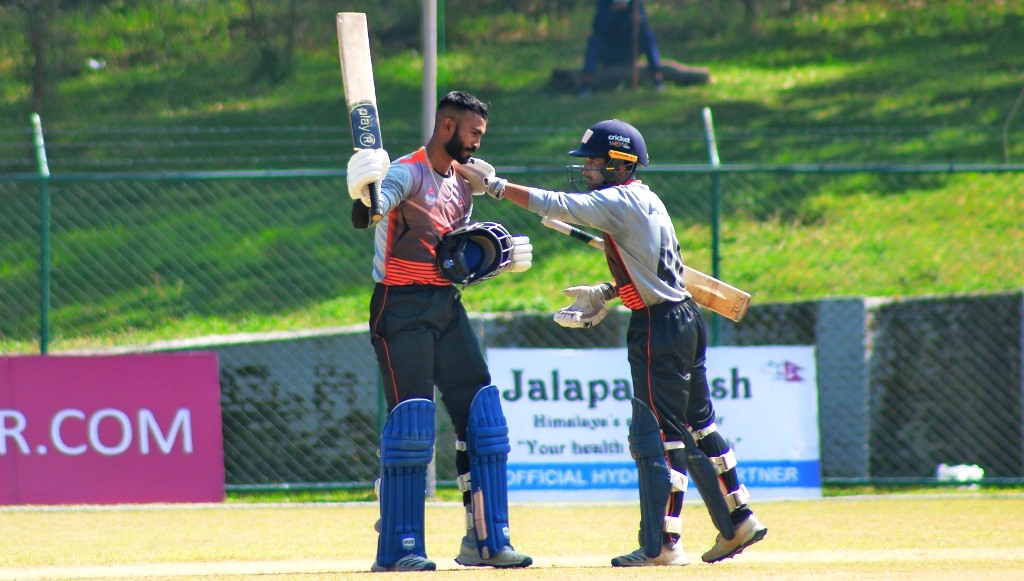 After defeating Karnali Province by 44 runs at the TU Cricket Ground on Saturday, APF has set a trip to the last four.

Karnali, who batted in reply with the target of 235 runs given by APF, could score only 190 runs in 48 overs. Even though Rabindra Shahi played a half century innings of 80 runs for Karnali, he could not give the team victory.

Before that, APF, who won the toss and batted first, scored 234 runs in 47 overs.

Aasif Shaikh played a century innings of 130 runs for APF. He hit 15 fours and 1 six off 136 balls. At a loss of 7 wickets for 140 runs, Asif shared a partnership of 63 runs with Bhuwan Karki. Bhuwan added 23 runs while Pradeep Airee scored 20 runs. Lokesh Bam and Deepak Bohara scored 10 runs each.

With this win, APF secured a place in the semi-finals from Group ‘A’. APF has scored 7 points in 4 matches. APF is at the top position. This is Karnali’s second consecutive defeat.

As part of the tournament, Madhesh Province defeated Lumbini Province by 92 runs in the match held at Mulpani ground on Saturday.

Chasing the target of 260 runs given by Madhesh, Lumbini managed to score only 167 runs after losing all the wickets with one over remaining after the scheduled 50 overs.

There will be two matches in the tournament on Sunday. Gandaki Pradesh and Tribhuvan Army Club and Kirti at Mulpani Cricket Ground