Kenya vs Nepal 3rd ODI
Skip to content
Home Articles How quick were Nepali bowlers during the ICC World T20? 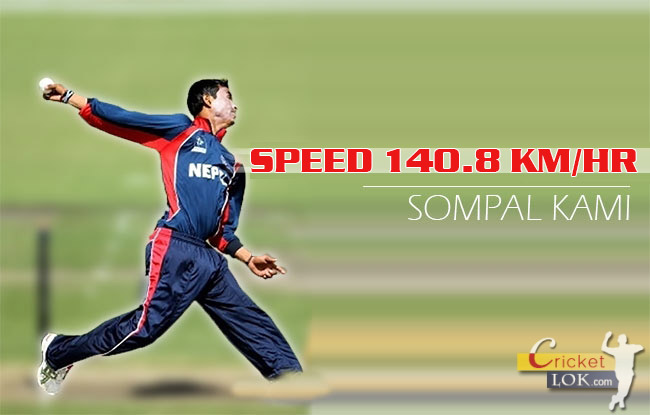 The ICC World T20 was the first televised tournament in which Nepali bowlers had an opportunity to challenge the speed gun. Continuing for the previous articles, in this article we will compare how the bowlers fared in the battle against the speed gun in the three matches.

Sompal Kami raised the bar even higher against Afghanistan in the final game. He increased the average speed by another 2 Km/h. bowling almost 135 Km/h in average. The slowest ball bowled by him in the match was 130 Km/h, which was quicker than the fastest ball of the rest of Nepali bowlers.

Both the pacers were fired up for the game. Man of the Match Jitendra Mukhiya also raised him average speed by 1.6 Km/h than the last game.

Meanwhile, captain Paras Khadka bowled medium pace for the first time in the tournament. He averaged 116.16 Km/h with his medium pacers.

Spin triplets Shakti, Basant and Sagar also raised their average speeds in the game although they bowled a touch slower than in the tournament opener against Hong Kong.

As expected, Sompal was the quickest of the Nepali bowlers during the course of the tournament. He averaged 132.98 Km/h which translates to 82.63 miles per hour. Meanwhile, Jitendra averaged 125.59 Km/h during the tournament. Paras averaged 93.3 Km/h as spinner and 116.16 Km/h as medium pacer.

Basant Regmi was the slowest among the spinners, probably due to the fact that he flights the ball more than the others. Shakti Gauchan was quickest among the spinners as he bowls more quick skidding balls than turners. Sagar meanwhile averaged 84.10 Km/h with his tight off spinners.

Note: We have calculated average speed separately for the off spinners and medium pacers bowled by Paras Khadka as calculating average speed under one heading for different bowling type will provide a diluted figure.

In the first delivery of the last over of the match, a fired up “Gulmi Express” Sompal bowled a 140.8 Km/h delivery which translates to a whopping 87.49 miles per hour. The official ICC website displayed it to be 140.8 Km/h. However, StarSports1 rounds off the bowling speeds due to space constraints and displayed 141 Km/h during its coverage of the match.

The delivery was also the quickest of the match. This was the first time a Nepali bowler delivered the fastest ball of the match. In the previous matches, Hong Kong All-rounder Irfan Ahmed (140.3km/h, 87.18 mph) and Bangladesh bowler Al-Amin Hossain (136.4 Km/h, 84.76 mph) bowled the quickest deliveries of the match.

Sompal’s delivery also happens to be the quickest ball bowled in the three matches Nepal played. This is no mean feat for an upcoming 18 year old pacer against the likes of test players Mashrafe Mortaza & Al-Amin Hossain and the potent Afghani duo of Shapoor Zardan & Dawlat Zardan. This gives further testament that with age and further conditioning Sompal can definitely hit the coveted 140 Km/h consistently and solve Nepal’s fast bowling woes.

However, Afghan batsman Asghar Stanikzai hit that particular delivery for a four towards cow corner.

Man of the Match Jitendra Mukhiya managed to get past the 80 miles barrier with the first ball of his last over. Mukhiya too has a potential to increase his speed to 83 mph mark with conditioning and age.

Paras Khadka’s quickest ball was as a medium pacer was a shade over 75 mph. He was also quickest of the spinners perhaps due to his medium pace roots.

Shakti’s fastest ball was 94.8 Km/h, just a shade ahead of Sagar’s 94.2 Km/h. Basant Regmi, who more often bowls with flight instead of quick darts bowled 92.7 Km/h, the slowest of the spinners.

Although fastest ball of spinners does not make an interesting reading, things would have been different had the Revolution Meter, which measures the revolutions per minute of the ball bowled by a spinner had been available. The revolution meter was first used during Sky Sports’ coverage of the 2013 Ashes series.

Note: Paras Khadka’s fastest ball as an offspinner and as a medium pacer are shown separately.

NEED FOR SPEED: HOW FAST WAS SOMPAL DURING THE GLOBAL T20 CANADA?